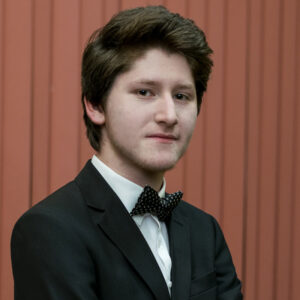 Emanuil Ivanov was born in 1998 in the town of Pazardzhik, Bulgaria. Emanuil Ivanov studied with Galina Daskalova and Atanas Kurtev. As winner of the 1st prize at the 62nd Ferruccio Busoni International Piano Competition, he is currently engaged in advanced studies at the Birmingham Royal Conservatory with Pascal Nemirovski and Anthony Hewitt. He has won first prizes in competitions such as “Vivapiano”, “Scriabin-Rachmaninoff”, “Viktor Merzhanov”, “Pavel Serebryakov”, “Liszt-Bartók”, “Young virtuosos” and “Jeunesses International Music Competition Dinu Lipatti” (Bucharest), and second prize in the Frederic Chopin competition (Saint-Petersburg). His participations in masterclasses include those of Dmitri Bashkirov, Dmitri Alexeev, Andrzej Jasinski, Vladimir Ovchinnikov, Ludmil Angelov and Pavel Egorov. Emanuil Ivanov has performed at many festivals in Bulgaria and has also given solo recitals in France and Poland. He has played with leading Bulgarian orchestras. In 2016, he also participated in the Moscow meets friends festival in Moscow. In 2017, he performed alongside renowned Bulgarian pianist Ludmil Angelov in a recital in the Royal Palace in Warsaw and debuted on the stage of Bulgaria Hall in Sofia in a concert with Classic FM symphony orchestra under the baton of Grigor Palikarov. In the next two seasons, the young pianist will perform in recitals and as a soloist with orchestra in the most important music centres of Europe and Asia, such as London, Munich, Milan, Rome, Vienna, St. Petersburg, Hong Kong, Tokyo, Beijing and many other capitals.